This event was held on 2019-09-07 in Waterras Common Hall—I attended only the first session of three that day.

It was basically a Maeshima Ami mini fan meeting and watashikai (meet & greet). あみ対いち ("Amitaichi") is a pun with her nickname, Amita, roughly "Ami 1-on-1". They gave us name tags to write our names on to make the meet+greet smoother.

Amita started out by explaining how the event came to be: she wanted to meet fans more directly than at stage or live events, so she talked to her staff and it eventually took form. When she came to the venue early, she made a big deal about it being close up.

Amita also asked where people were from: Tokyo, Kanto (outside of Tokyo), outside of Kanto, and overseas. There were maybe 6 of us from overseas (within the ~150 seats), and we got a round of applause.

Having introduced the event, Amita answered a few questions from Twitter.

After the question segment, Amita announced some events:

Her goal is to have opportunities to meet fans every 3 months or so.

Finally, Amita's watashikai began. It's a 20sec meet and greet where she gives you a sticker. They set up a divider in the corner of the room for privacy.At first, you could hear conversations, so the staff played videos from her YouTube on the projector to help.

My thoughts: the talk show was shorter than expected (25min), but they prioritized the watashikai—20sec is longer than many similar events, and it adds up to 50min for 150 people. Most people looked quite happy after talking to Amita, so I think it was a good choice.

Personally, I told her that since I'm from the US, I don't have the chance to go to many events, but I really enjoyed seeing her at RAS's performance at 7th Live. She was happy to hear that, and told me to try to come in January (to the PasuPare live event)! 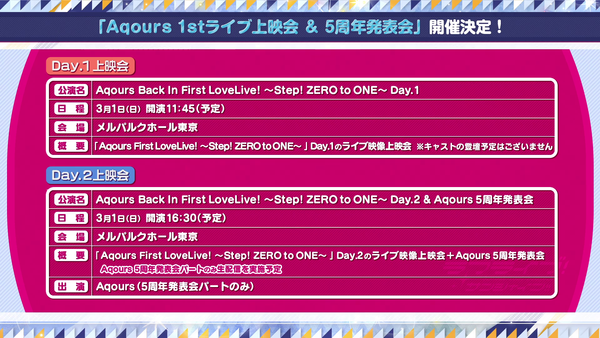 Information on the Aqours First LoveLive! screening in Mielparque Hall (Tokyo) on 2020-03-01.

This Fan Meeting was held in Zepp Nagoya on 2019-09-05, with Saechi (Otsuka Sae), Hasshi (Ohashi Ayaka), and Itou Ayasa. They started out with a skit read off a script. Tae, Saaya, and Arisa have somehow ended up in Nagoya (not knowing how they